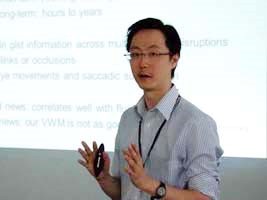 My research mainly focuses on perception, memory, and various aspects of cognitive processing. I mostly use EEG and brain stimulation (TMS, tDCS, tACS) techniques to investigate these topics. Recently, I am also venturing into the field of social neuroscience with topics such as deception and moral reasoning.

My newest projects mostly involve the cognitive mechanisms behind successfull (or unsuccessful) lying. This is not only useful for crime-scene investigation scenarios; it happens all the time in our daily lives. We lie about our own feelings to be polite, or maybe to be politically correct, and sometimes we lie for unselfish reasons such as protecting others (e.g., white lies). Therefore, deception may be a necessary element in social functioning. More details about what I'm doing can be found here. 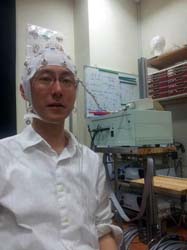 Another line of my research focuses on the use of neuroimaging and stimulation techniques to study visual awareness, visual attention, and visual memory. Specifically, I use transcranial magnetic stimulation (TMS) and transcranial direct current stimulation (tDCS) to modulate neural activities in the parietal cortex to investigate its role in visual working memory. We also combine these neuro-modulation techniques with imaging tools such as fMRI, ERP, and EEG time frequency analysis to uncover the processes behind the behavioral effects of neurostimulation. Recently, we found that anodal tDCS can artificially improve people's performance (at least temporarily) on a visual short-term memory task, but only if these people's natural performance fell below average. These studies are described in more details here.

In my graduate years I investigated how actions, such as pointing (finger) and grabbing (entire hand), can alter the way we perceive visual space. Hand positions can create a stronger attentional engagement (a phenomenon originally discovered by Catherine Reed, 2006, and Richard Abrams, 2008). Intending to perform an action also works similarly (Tseng et al., 2010 Perception). The underlying rationale is that perception and action is like a two-way street: seeing something enables us to act precisely with it, while these performed actions constantly change the visual environment around us. Interestingly, this attentional engagement helps people encode more information from a scene, but disappears when one's hand(s) can no longer touch the display (Tseng & Bridgeman, 2011 Exp Brain Res). I am now investigating the relationship between aciton, memory, and wayfinding skills (i.e., navigation).

Currently at Taipei Medical University I am continuing these lines of research, as well as exploring some other topics that I have long been interested in. These new topics include driving-safety, usability design, lie detection, moral (and religious) judgment, navigation, and the cognitive neuroscience behind these phenomena. 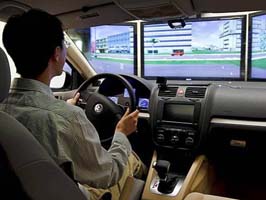 You can also visit my research page for more projects: http://gimbc.tmu.edu.tw/index.php?action=research&group=16&author=3&year=